07Aug Mushroom Farm Gets Kitted Out with LEDs

Mushroom farms are one of the most hostile applications for lighting equipment. With temperatures of up to 60C, humidity of between 95 and 100 per cent and regular hosing with water, it’s one punishing place to put a light fitting.

So when Thakeham Farm, a mushroom farm in Pulborough, West Sussex, UK, needed to replace its existing light fittings, the owners required a lighting product that could withstand the harsh conditions whilst also providing top energy efficiency. 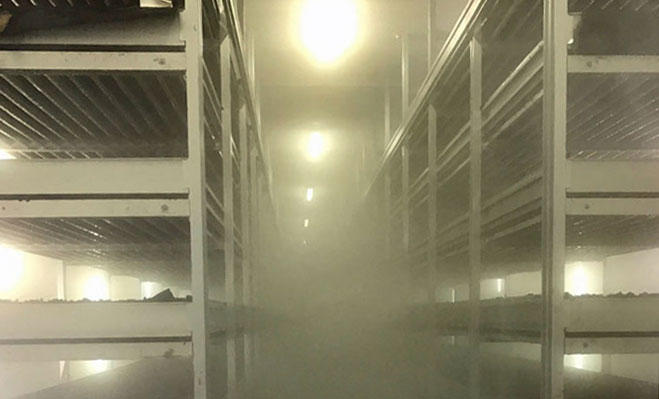 The farm is part of Monaghan Mushrooms, one of the largest mushroom producers in the world, and has been operating since 2011. The farm consists of 70 growing houses and produces 6,500 tons of mushrooms a year. Due to its complex nature, the farm requires a lighting fixture for its growing houses that would be resilient to the differing environmental conditions which range from 14C to 60C, as well as easy to maintain.

To replace the non-corrosive IP65 5ft and 6ft fluorescent battens that were previously in situ, the specification called for a IP66 luminaire with over 100 lumens per Watt, and IK08 impact resistant, all with through wiring to make installation easier.

The solution was the LED Dino fitting from Megaman, which achieves 104 lumens per watt, thanks to a clear prismatic diffuser. This allows the highly efficient LED lamps to achieve the same lumen output as a traditional twin tube fitting.

The installation of the battens has seen an instant energy saving for Thakeham Farm of 50 per cent, reducing watt usage from 130W to 63W while producing the same amount of lumens. Tool free terminal blocks and covers, plus the cable entries and through wiring, also ensured that cables could be wired from one fixture to the other, enabling an easier installation where energy sockets were hard to access.

Additionally, the LED battens, unlike the glass battens previously installed, have a tough polycarbonate body and are IK08 rated.

The polycarbonate body will not expand or contract when subject to the varying temperatures within the growing houses reducing the chance of them breaking. Additionally, they reduce the inconvenience and cost of replacement but also ensure that the crops at Thakeham Farm did not suffer any damage that would incur if a glass batten shattered.

Furthermore, due to its IP66 rating, the battens will also be able to withstand the regular water spraying the mushrooms need during the primary stages of growth.