Philips Lighting has launched a wireless lighting-as-a-service initiative for commercial offices, hoping to convince building managers to implement smart Internet-connected lighting schemes that Philips has addressed to date with more expensive wired offerings based on Power over Ethernet (PoE) that appeals to a narrower audience. 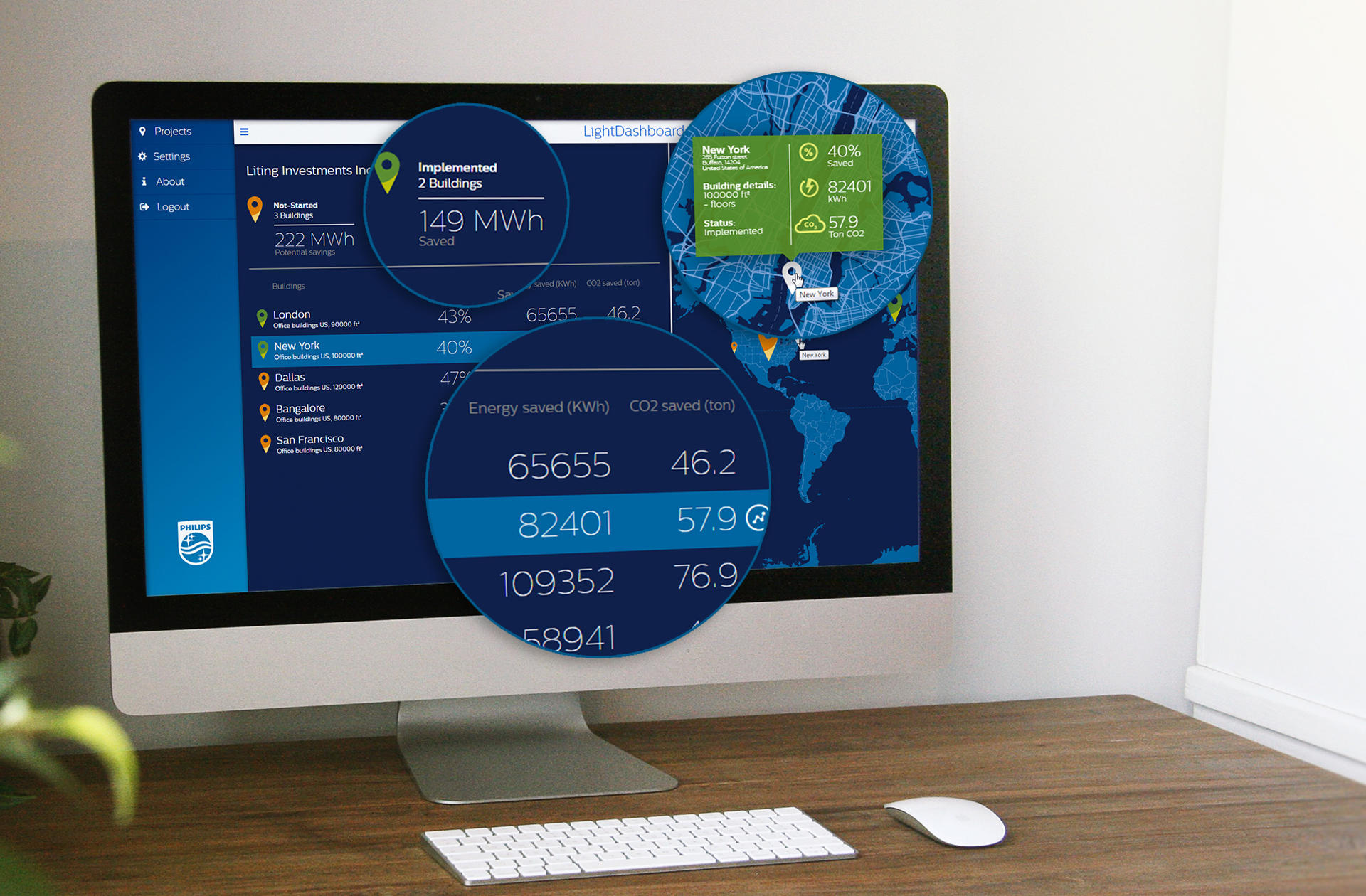 The new cloud-linked Philips InterAct Office system embeds sensors and ZigBee communication chips inside LED ceiling lights and luminaires, and reduces energy consumption by controlling lights more intelligently. Sensors such as motion detectors turn lights on, off, up, and down as needed, and users can wirelessly pre-program — or “commission” — groups of lights to respond in certain ways at certain times. They can also directly control lights wirelessly using ZigBee from phones or tablets.

The smart lighting system allows remote, central management of floors or groups of buildings. Operators can view lighting schemes, energy consumption, room occupancy, and the like on a dashboard supported by Amazon's cloud, and then decide whether and how to alter lighting schemes or even reassign building space. Information travels between the lights and the cloud server through a combination of wireless and wired Internet hops.

"Energy savings are just the tip of the iceberg,” said Emmanuel Sabonnadiere, CEO of Philips Lighting's Professional business group, which targets commercial and outdoor environments. “Our 'Light as a Service' model frees customers to focus on their business, while information from sensors in the luminaires gives them unique insights into the use of energy and office space to enhance operational efficiencies."

InterAct Office does not replace Philips' PoE smart lighting push, but “complements” it, Philips said. The company noted that InterAct could attract many more building managers because it is more suitable for minor retrofit jobs, which represent the bulk of opportunities in the commercial office market, compared with the more complicated, disruptive, and expensive new wiring involved in PoE.

In PoE lighting, both electricity and data travel over Ethernet cable. One of its main advantages is that it can slash electrical costs on new buildings and major retrofits by eliminating traditional electrical cabling and the associated certified electricians' costs. Ethernet cable, known for carrying data, can handle the low voltages that drive LEDs, renowned for their low energy needs.

“The PoE solution we have is aimed specifically at those large renovations of offices where they redo the entire caving and rip and replace the ceiling and so forth; and it's ideal for new buildings,” a Philips spokesperson explained to LEDs Magazine. “In contrast, the wireless Philips InterAct Office is designed for retrofitting existing offices, which form the vast majority of office lighting projects worldwide.”

While PoE provides superior data bandwidth and control sophistication, the wireless package could well suffice for many offices, Philips noted.

Jeff Cassis, senior vice president of end user sales for Philips' Professional unit in the US, called the wireless control system “a soft touch that doesn't require any changes to the infrastructure or the switches, and you're not rewiring.”

Philips is offering InterAct Office as a service in order to help budget-strapped building managers avoid upfront capital expenditures (capex). In contrast, PoE buyers participating in big building projects more often have a budget, so while Philips sometimes sells PoE as a service, the company also sells it on a straight-up product basis.

“With [PoE] being more tailored towards new build and deep renovation, however, typically there is a capex budget available, whereas in retrofit there might not be, and this is where we believe the wireless service offering hits a large target market,” Philips’ head of office lighting systems Derek Wright told LEDs.

Philips is initially targeting InterAct Office at North America, where it says there are 15 billion ft2 of existing office space, citing Navigant Research. Philips did not reveal pricing, nor did it identify any actual customers.

Cassis said InterAct can cut energy consumption by between 50 and 75%, depending on what sort of lights the LEDs replace. A lot of the savings come from the lamp replacement itself, and another 15–25% come from the intelligent usage. Offices then save additionally via classic LED benefits such as lower maintenance and replacement costs.

Philips is offering the LED lighting in three configurations: tubes that slip into existing fluorescent tube fixtures; an attachment that adds a new luminaire onto an existing troffer; and a more elegant replacement troffer with higher-quality diffusers. All three perform roughly equally in aspects such as lighting levels, color temperature, and efficiency.

Cassis said Philips chose ZigBee over Bluetooth as its wireless technology because it has a longer range that is more suitable for offices. By comparison, in another business area, Philips is using Bluetooth as well as visible light communication (VLC) for indoor-positioning systems that it is deploying in retail locations. Philips included VLC in a complex mix of technologies at an early smart building deployment at The Edge office complex in Amsterdam some two years ago, but VLC seems to have now fallen out of its general smart office topology.

In one feature that Cassis called “an important part of the story,” the embedded sensors and ZigBee communications chips draw on the same electrical power supply as the lights, using a Philips designed driver.

That could help Philips win sales in competition against a more conventional information technology provider who could provide chips and sensors but who would have to use either a costly second electrical power supply, or problematic batteries.

To some extent, lighting companies like Philips are competing against — and in some instances collaborating with — companies from the information technology and building automation industries to provide smart building products and services.

Cassis steered away from that characterization of the business battle. But he noted that sensor-equipped smart lights could detect a number of activities other than lighting, and thus feed information from the edge of a building network to a central control location that could in turn order changes in, for example, heating or cooling settings. He described an LED light as an “edge device that happens to be a luminaire, and it has the ability to talk and be smart.”

He added, “What better place to put this technology than in an edge device which is universally distributed throughout a building — a light? We understand lighting really well and we understand how to get data to the light source. When you get data to and from the light source, what else can you do with it? You can dim it. You can control blinds, you get temperature data, and you can send that back to an HVAC system. Before you know it, there's no other control level needed in that room. You don't need a thermostat on the wall anymore. You don't need a light switch.”

Meanwhile, the Philips spokesperson said that Philips' PoE offering is “continuing to do well,” and noted that Philips has not publicly named all of its PoE lighting customers. Philips has worked to some extent in partnership with networking giant Cisco, such as on a PoE lighting installation at 14 of the 32 floors at the Torre Europa skyscraper in Madrid and at the Zurich headquarters of Swiss energy company Alpiq InTec, among others.

The announcement of InterAct comes as Philips' Professional group lags behind Philips' LED bulb and smart home units in growth rate, even though Philips estimates that the global office lighting systems market - a subset of the overall lighting market - is today generally worth $5 billion. In its financial report for the first quarter that ended March 31, Philips last week noted that Professional grew at a rate of 2.5%, compared to 20.6% for the Home group, and 16.7% for LED bulbs (the Lamps group, which consists of non-LED lighting, declined by 17.9%).

Philips hopes that InterAct Office stimulates growth in the office sector, as the company, like others in the lighting industry, continues to try to figure out exactly how to re-brand and re-position itself as an IT and data outfit in the digital era.