05Jun LEDs are Eliminating Mistakes in the Operating Room

Tunable LED lighting has been modernising 90 hospitals and more than 500 endoscopic and related surgery and examination rooms. Doctors, nurses, and clinicians swear it has not only improved their ability to see anatomical details, but that it has also boosted their alertness and reduced their stress levels.

Most endoscopic surgeons around the world function in relative darkness, as the hospitals in Denmark, Sweden, Norway, Greenland, and the Faroe Islands used to do.

Endoscopic procedures entail inserting tubes through the mouth and other natural openings, or through keyhole incisions, when the operation goes by associated names such as laparoscopy. Surgeons and other professionals manipulate those tubes from outside the body. They see what they are doing on the inside by looking at video monitors displaying images sent by tiny cameras mounted on the tubes.

To make the computer screens easier to see in these minimally invasive procedures, hospitals typically turn the lighting way down in endoscopic procedure rooms, unlike the bright white light associated with open body surgery. The low light levels can induce drowsiness - not a desirable attribute for getting the job done. It can make instruments hard to find. And even the little amount of room lighting that is used can cause glare and reflection on the video display.

This was all a problem for chief consultant surgeon Dr. Jesper Durup from Odense University Hospital in southern Denmark, who more than a decade ago decided that there had to be a better way to perform his laparoscopic surgery - keyhole surgery of the abdomen.

Durup approached a couple of lighting specialists who in 2006 would go on to found a company called Chromaviso and develop a system of tunable, coloured LED room lighting to address these shortcomings. Durup himself gets credit as a co-inventor, although he is a surgeon, not a Chromaviso employee.

Chromaviso, based in Aarhus, Denmark, is the company that has supplied the 90 sites. Today, it promotes the system with the tagline, "Better screen, less fatigue, fewer mistakes." 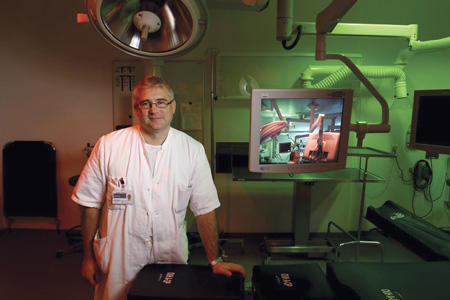 On the visibility side, for example, it emits green light from behind the screen to reduce reflection and enhance the depth and contrast on the monitor, as well as to help open the surgeon's pupils. And it shines red light from behind the surgeons to cut down on screen glare It provides white light in areas of the room where anaesthetists work and where nurses have to find equipment. Chromaviso says that this "zoned" lighting approach is a critical feature of its system.

User and co-inventor Durup is a big believer and regularly operates under the lighting at Odense. "We used to have a problem when we were operating," Durup said. "We had a lot of reflection on the monitors. It was difficult to see the details. Now we can see better. When we can see better, we do better surgery. We're able to see small nerves and small blood vessels very clearly and avoid them."

What we have to remember is that when the surgeon is looking at the monitor, he looks at very tiny blown-up details, and he gets very anxious about what he sees and what he does not," said Chromaviso co-founder Claus Puggaard. "So any white light - natural or artificial - he dims it down or shuts it off." 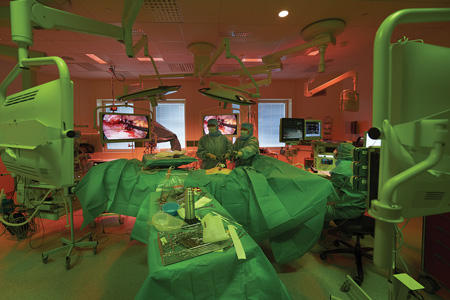 Thus the move to coloured, non-glaring, non-reflective lighting. And it's not just the surgeons who are benefiting.

Seeing better can have huge, positive, knock-on effects for all involved. "With ergonomic lighting, I can actually relax while I am working," Durup noted. "And when I relax more and become less stressed while I work, I produce better results."

Henning Antonsen, chief surgeon at Denmark's Kolding Hospital and another Chromaviso user, sang the same tune. "These improvements enable me to perform optimally during operations," he said. "If the circumstances under which we operate or examine patients are optimal, patients undoubtedly benefit from it."

No argument from Finn West, head of the endoscopy unit at the University of Copenhagen's Bispebjerg Hospital. "It goes easier because you don't have to squeeze your eyes. We had one doctor who had migraines that disappeared when we got the lighting." 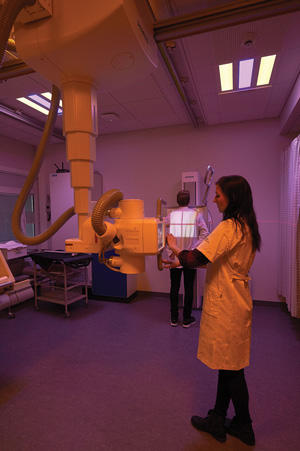 While green, red, and white light are common outputs from the Chromaviso system, they are not the only ones. Sometimes other colours are optimal. At Odense, Durup says the hospital often mixes yellow with red to help staff spot blood vessels when they are inserting intravenous tubes. And it tunes behind-screen lighting to violet in order to provide a better view of X-ray and ultrasound screens, which show in shades of grey that green would render more difficult to see .

The same is true at Bispebjerg Hospital, which puts green light behind coloured screens during endoscopic procedures but dials up purple and blue behind X-ray and ultrasound displays.

"We have all the kinds of colours in the same room," said Bispebjerg's West. "And we can spot it where we will have it. So we can split up the room in different colours."

But it is the common combination of red and green during surgery that can provide an added benefit of relaxing the staff, an effect that Chromaviso's Puggaard says relates to the complementary nature of red and green wavelengths, which reflect and absorb in a balancing proportion. Other colour combinations do not have the same calming influence.

"I think there is something about complementary colours like red and green," agrees user and co-inventor Durup at Odense. "Red is giving a mood in the room."

Not only is it relaxing, but it fosters alertness compared to the darkness in which he used to work. While circadian lighting experts often correlate blue light rather than red to alertness, the alerting effect in Durup's laparoscopic surgery rooms is not necessarily circadian per se. That is, it might not be stimulating the circadian rhythm; rather, it is providing light where there was little or no light before.

"You can see a lot of things in the red light, but it also has a psychologically activating function as well," said Durup. "Where you have working staff, they should not be asleep, but they should be actuated a little bit. Red is the optimal lighting for the background." 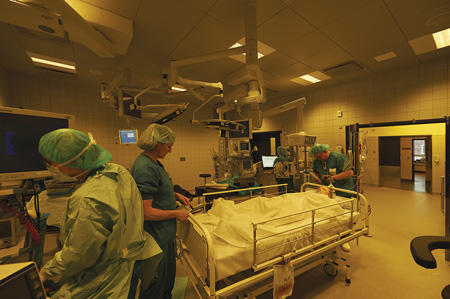 Odense is also using the warmer light to calm patients as they enter the operating theatre, before they are anaesthetised. The person arrives to warm amber tones that change once the surgery begins. If the patient is awake after the surgery, the same warm tones might bathe the room. Afterwards, bright white light shines to assist cleaning.

The Chromaviso system relies on DMX wiring, which Puggaard says is the best way to provide signal speed and to ensure up-time. Chromaviso has engineered the light fittings to be flicker free, and has designed them for the durability required in around-the-clock operating rooms, he added. The system is rated to last for 20 years, which Puggaard said is twice as long as the average lifetime of an operating room in Scandinavia.

There is also an ease-of-use aspect: At Odense, when Durup's team prepares for a gall bladder operation, it pushes a button labeled "gall bladder," one of about a dozen presets on a simple wall-mounted control panel that also includes "liver," "appendicitis," "patient," and others. Lighting will then change accordingly. For example, the "patient" setting yields soft tones. The "appendicitis" setting would change the location of the red and green light, because in endoscopic surgery, the computer screens - typically suspended on gliders - shift up and down the length of the patient's body depending on the location of the procedure.

Durup described a day in his ergonomic lighting life: "We have a little control panel in the room where you have the name of the 6 to 12 different procedures in each room, and you have all the presets on this little control panel. So when we're starting the operation, I can say to the staff, 'Okay, now we can change the lighting for this gall bladder operation' or whatever it is, then they press gall bladder operation and the lighting in the ceiling will change so that it's fixed exactly to this procedure.

"A standard preset could be 'patient light,' which is a more dimmed, nice yellow-reddish light so that when the patient comes into the room, when the patient is still awake, you have a light setup that is actually very calming and relaxing for the patient. So that is the primary light setting. And then when the patient is asleep and anaesthetised, then we can change to the procedure lighting. And that could, for instance, be a gall bladder. And then we press the button called 'gall bladder lighting,' and then the presets in the room will change for this operation.

"Then I can do the operation for the next hour or so, and when I'm finished with the operation, we can press the patient button again, and the patient will go out of the room. And when the patient is out of the room, we press another button, which is called 'cleaning light,' and this is a very white, very intense white lighting where you can see everything in the room. You can see blood and you can see dust and you can see everything. So when the staff is coming to clean the room for the next operation, they have optimised lighting conditions for that procedure. And then for the next operation, it could be something else. It could be a liver or appendicitis or whatever and you press a button for that procedure. So that's the way it works." 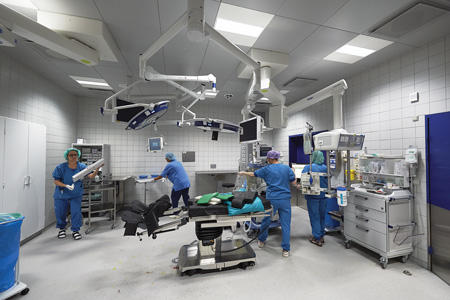 It all comes at a price of around €20,000 ($21,400) to outfit a standard operating room with a basic package. Extras can push it up to around €40,000 or €50,000 and include things like tie-ins to the building management system, enhanced colour mixes, additional zones, and Wi-Fi that allows controls from a tablet. The cost constraints of healthcare systems can sometimes stymie uptake. Some users, like Bispebjerg, have thus limited their deployment to 3 out of their 8 endoscopic units, and to 2 out of 10 laparoscopic-specific rooms, although they are planning to outfit many more rooms with the technology with the construction of their new hospital, planned for completion in another 3 or 4 years.

Other hospitals have proceeded with more extensive deployments. Aarhus University Hospital, in Chromaviso's home city, has the largest installation, having outfitted about 100 rooms.

Odense uses it in about 35 rooms, and is planning for many more installations when it, like Bispebjerg, opens a new hospital, planned for 2022 in its case. Durup and many of the users describe it as a technology they cannot now live without.